Mastering the Diagnosis of Schizophrenia

No Blood Tests or Brain Scans…How Do you Diagnose?

Since no blood test or brain scan exists for schizophrenia, a great deal of attention must be paid to the constellation of symptoms that best define schizophrenia to ensure accurate diagnosis. The definition of schizophrenia has evolved through the views of Kraepelin (avolition, chronicity and poor outcome), Bleuler (fundamental symptoms [associative loosening, affective blunting, avolition, autism, ambivalence, attention] and accessory symptoms [hallucinations, delusions]) and Schneider (reality distortion/positive symptoms), with the relative importance of the various perspectives changing over time1. The development of the Diagnostic and Statistical Manual Of Mental Disorders (DSM) and World Health Organization International Classification of Disease (ICD) helped to define the essential features of schizophrenia, although the criteria used to diagnose the disorder continue to evolve. ICD and DSM criteria for schizophrenia differ slightly, but together they are routinely used to identify symptoms, diagnose the disorder, and codify it. 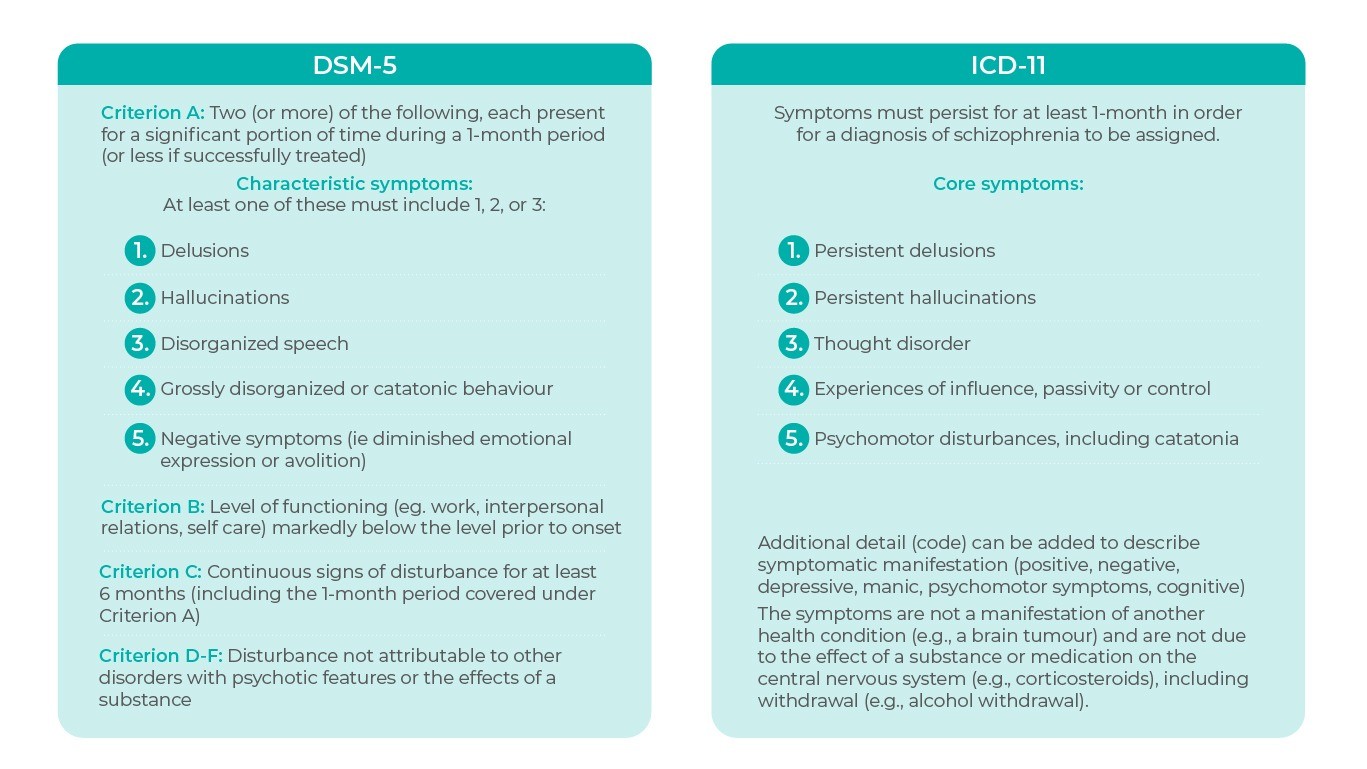 As can be expected in any classification system, the importance of some aspects of schizophrenia has been lost to the dimensional approaches of the DSM and ICD. For example, while positive symptoms are the predominant diagnostic feature of schizophrenia in both systems, negative symptoms alone are not sufficient to meet the criteria for a diagnosis of schizophrenia despite their impact on functioning and presence early in the course of illness (largely before an acute psychotic episode even leads to a diagnosis)4–6. Of additional concern, neurocognitive impairment, another core component of schizophrenia, is not mentioned as a diagnostic criterion in either classification system7. These observations should be considered as great limitations of the dimensional approach currently used to diagnose schizophrenia

Clinical rating scales are used to evaluate symptoms and specify the severity of illness in schizophrenia. They can be viewed as a way to quantify clinical judgement of current psychopathology and change in symptoms over time. Most often used in clinical trials for evaluating the efficacy of schizophrenia treatments, scales are also used in clinical settings, although time constraints related to administration and the availability of trained raters are limiting aspects. Newer scales, with an eye toward convenience in the clinical setting and better assessment of negative symptoms, have been developed to evaluate schizophrenia, but there is no consensus regarding what rating scale is the best. 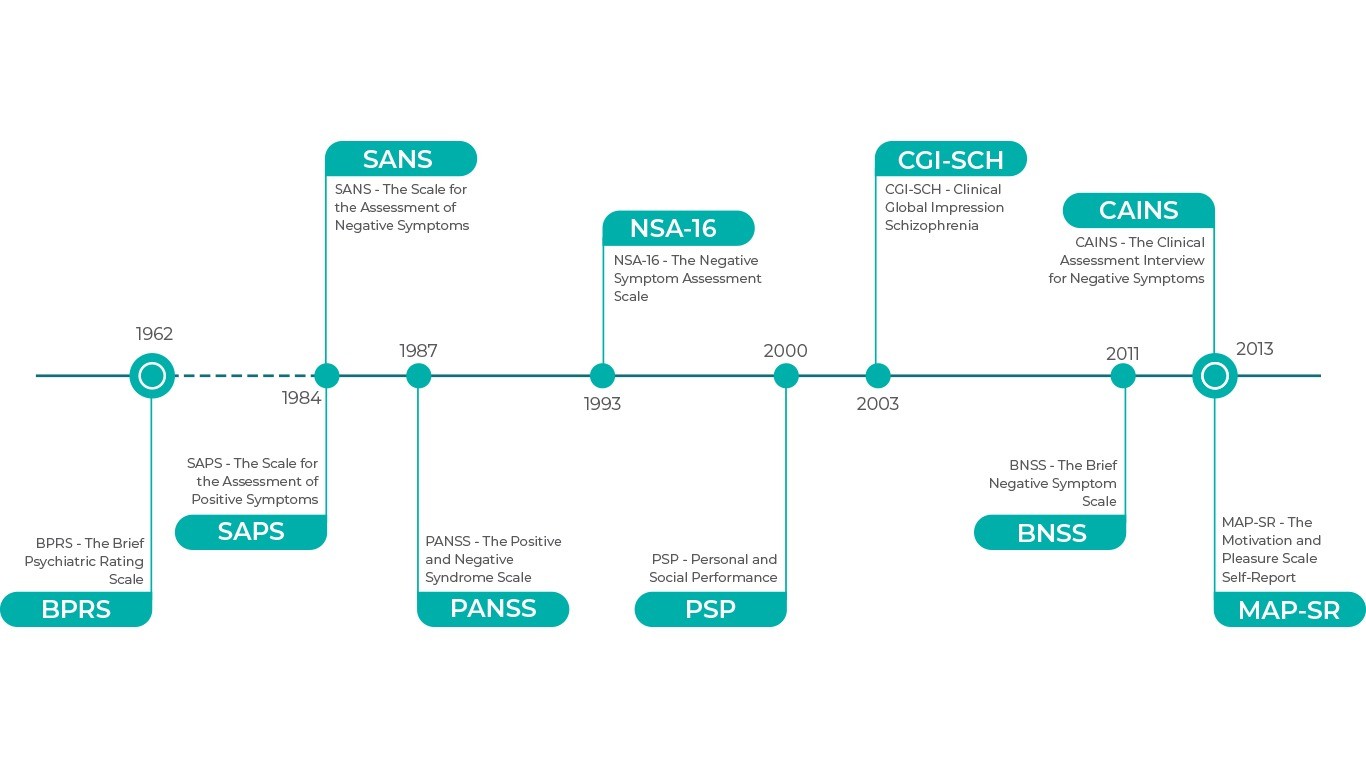 The Positive and Negative Syndrome Scale (PANSS)15 is the most frequently used clinical rating scale that was developed from the need to reduce the heterogeneity of what was known about schizophrenia. The PANSS has 30 items and 3 subscales; scores range from 1 (absent) to 7 (extreme), with higher scores indicating greater symptom severity. Items on the Positive Symptom subscale are delusions, conceptual disorganization, hallucinatory behavior, excitement, grandiosity, suspiciousness, and hostility. Negative symptom items (NS items) are blunted affect, emotional withdrawal, poor rapport, passive-apathetic social withdrawal, difficulty in abstract thinking, lack of spontaneity and flow of conversation, stereotyped thinking. Since stereotyped thinking and difficulty in abstract thinking are no longer considered negative symptoms, the inclusion of these items may confound the analysis of negative symptoms when the PANSS NS is used16. General psychopathology items, which are inconsistently related to either the positive or negative symptom domains, comprise somatic concern, anxiety, guilt feelings, tension, mannerisms and posturing, depression, motor retardation, uncooperativeness, unusual thought content, disorientation, poor attention, lack of judgment and insight, disturbance of volition, poor impulse control, preoccupation, active social avoidance.

Differential Diagnosis: If not Schizophrenia, Then What?

Since the signs and symptoms of schizophrenia are not specific to schizophrenia alone, clinicians must first rule out other mental health or medical disorders that may present with psychotic symptoms, negative symptoms, or cognitive dysfunction before a diagnosis of schizophrenia can be made. This is accomplished through physical examination, medical history, tests and screening, psychiatric examination, the use of ICD criteria, and collaborative information obtained with permission from family and friends.

Diagnostic criteria for schizophrenia and other psychotic disorders reference 5 domains of psychopathology (hallucinations, delusions, disorganized speech, abnormal psychomotor behavior and negative symptoms). The severity and duration of symptoms from each of these domains can vary within individuals given the same diagnosis and can contribute to differential diagnostic decisions17.

Conditions to Rule Out: Differential Diagnoses for Schizophrenia3,18

*Not specified in ICD-11 any more

Psychiatric Diagnosis: Lessons from the DSM-IV past and cautions for the DSM-5 future.

Frances AJ, Widiger T.
Annu. Rev. Clin. Psychol. 2012; 8:109–130.
“Our descriptive classification of disorders is old and tired. It has worked hard for us and continues to have many valuable and irreplaceable functions. But a paradigm shift in psychiatry awaits a deep understanding of the causes of psychopathology.”

ICD and DSM criteria for schizophrenia differ slightly, but together they are routinely used to identify symptoms of schizophrenia, diagnose and codify it.