The Challenge of Negative Symptoms in Schizophrenia

Recognition and Prevalence of Negative Symptoms

Although negative symptoms have long been recognized as an independent symptom domain, distinct from positive symptoms, neurocognition, and social cognition, they can still be difficult to recognize. For example, significant symptom-related deficiencies in affect, motivation, communication, and social functioning might easily be mistaken for depression or cognitive difficulties1, limiting the potential to appropriately manage symptoms and support the patient. Recognizing and managing these challenging symptoms is important since negative symptoms are responsible for a large part of the long-term morbidity in patients with schizophrenia6,7. Negative symptom severity has been linked to worse outcomes in several areas of functioning, including occupational and academic performance, household involvement, social interactions and formation of lasting relationships, participation in activities, and quality of life8, which speaks to the importance of providing effective treatment to improve impairment across life’s jurisdictions. 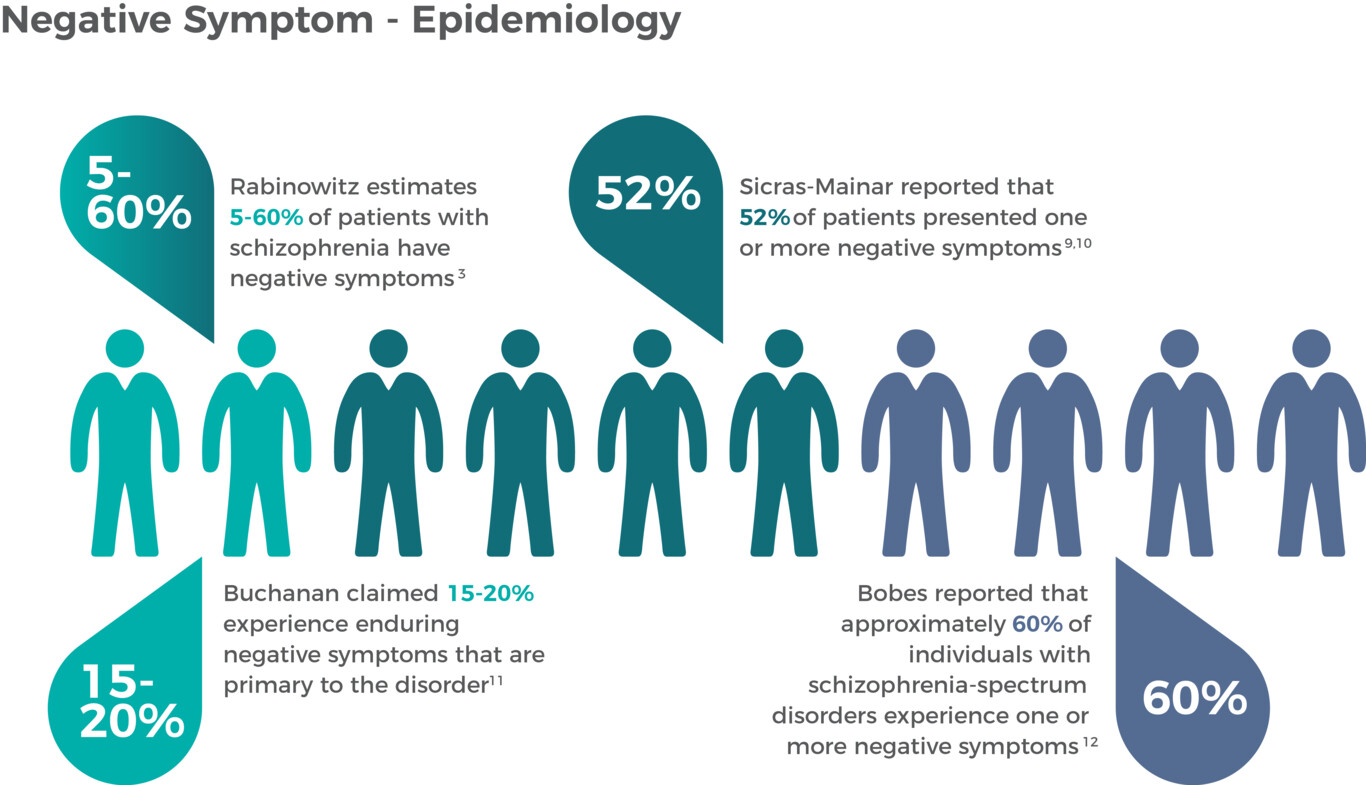 Prevalence of negative symptoms in schizophrenia

When the population was limited to patients with only primary negative symptoms that are persistent or enduring (ie, deficit syndrome), prevalence estimates range from 25–30% of patients in clinical samples to 14–17% of patients in population-based samples13. Based on the collective epidemiological data, it has been estimated that the prevalence of primary, enduring negative symptoms is likely in the range of 15%-20%11.

Despite a lack of consensus regarding the prevalence of these challenging symptoms, it is clear that negative symptoms are highly prevalent and associated with significant illness burden, dictating that all clinically relevant negative symptoms should be appropriately treated to improve patient outcomes.

Presentation of Negative Symptoms Across the Disease Course5 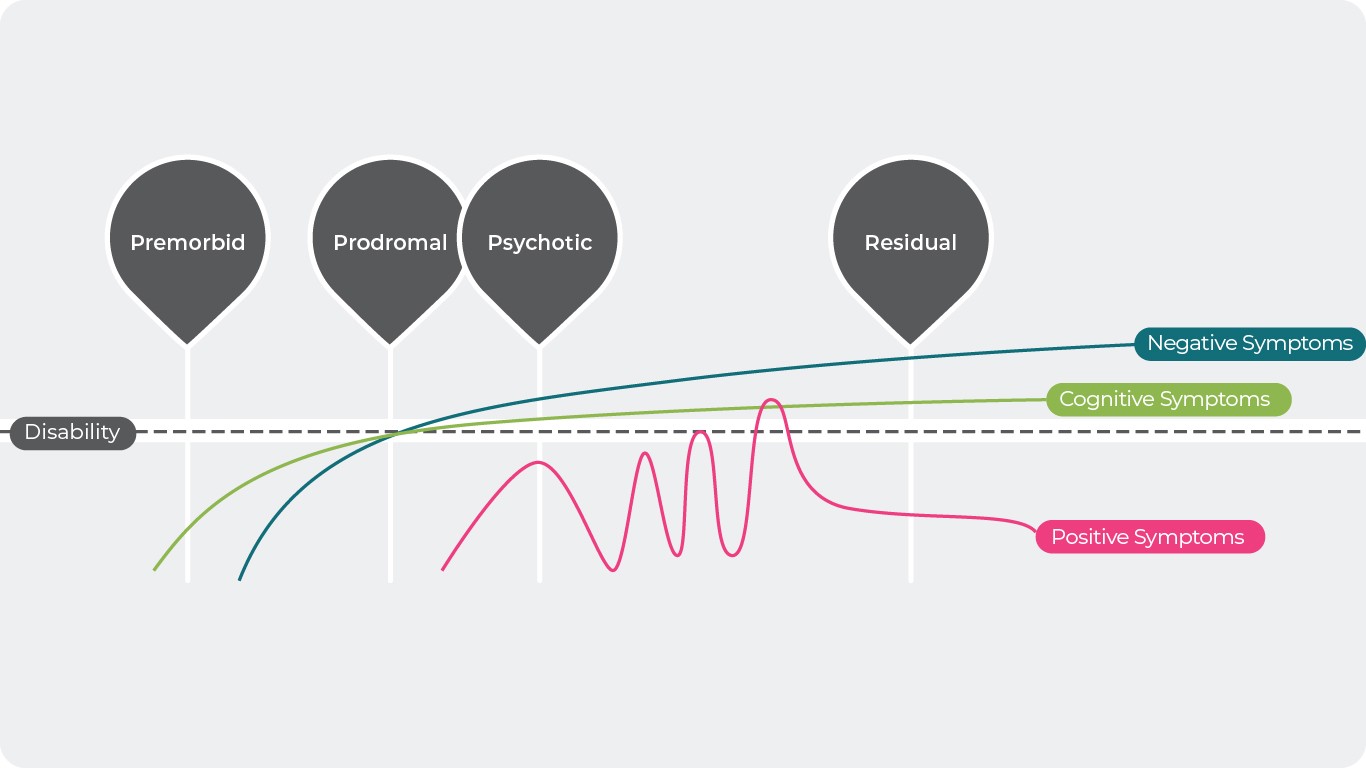 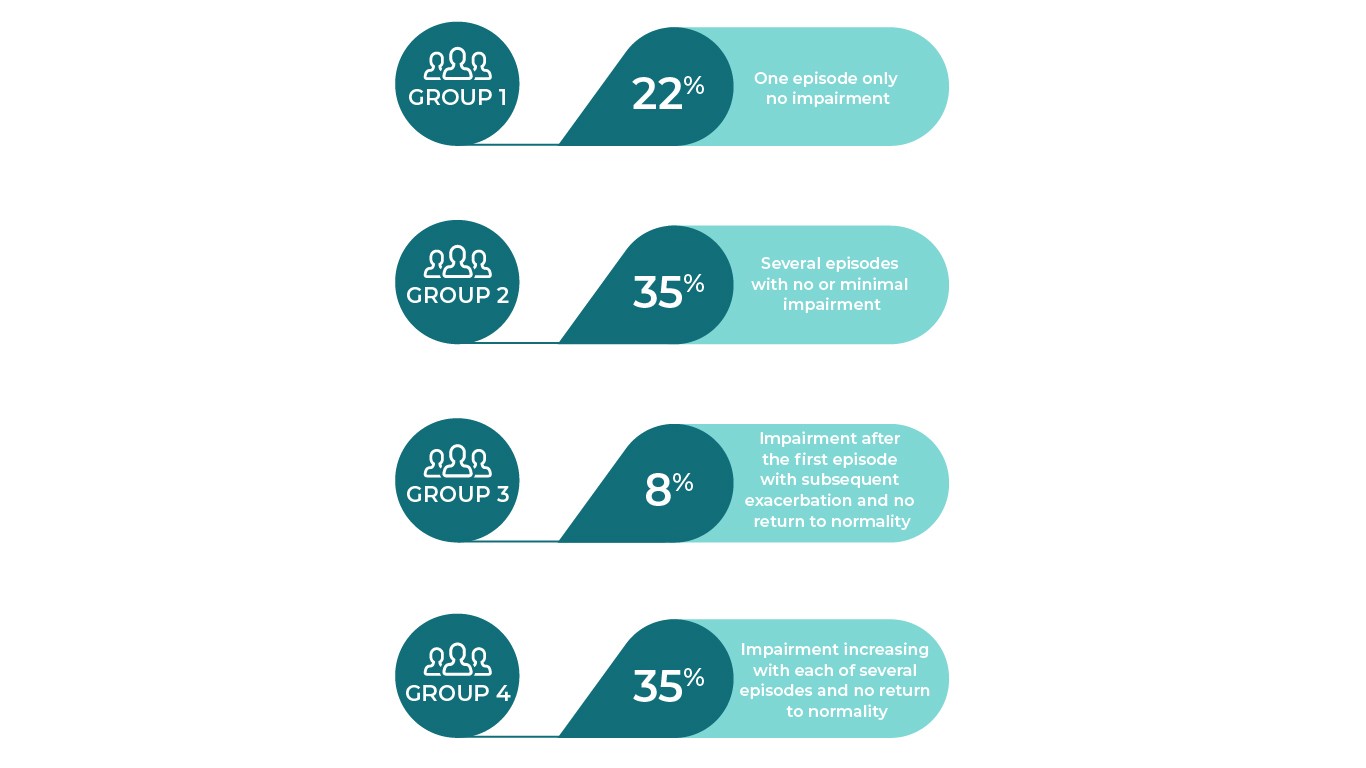 Although there is a typical disease course and presentation of symptoms in schizophrenia, schizophrenia is by no means a homogeneous disease and not all patients will experience all stages of illness. In an attempt to classify patients according to the course of their illness pattern, 4 broad subgroups were constructed from 5-year follow-up data in a cohort of patients with schizophrenia. As shown, some patients experienced only one episode followed by recovery while others experienced frequent episodes and increasing disease severity without abatement of symptoms17. Of the patients in Groups 3 and 4, persistent florid symptoms with one or more exacerbations were noted during the follow-up period. Symptoms of auditory hallucinations; thought withdrawal, insertion and interruption; thought broadcasting; somatic hallucinations; delusional perception; and feelings or actions experienced as made or influenced by external agents (ie, first-rank symptoms) were present in 75% of patients in Group 3 and 94% of patients in Group 4 at 5 years. In the most severe group, there was a gradual increase in residual psychopathology after each exacerbation before a stable level of severe impairment was reached. Clinicians should be aware that negative symptoms can occur at any point during the course of schizophrenia; for example, at least 1 negative symptom was noted in up to 90% of patients having a first psychotic episode and 35%-70% of patients continued to have clinically significant symptoms that persisted after the initiation of treatment4,18,19.

Galderisi S, Mucci A, Buchanan RW, Arango C.
Lancet Psychiatry 2018 Aug; 5(8):664-677.
“Negative symptoms are present in more than 50% of people with schizophrenia, have a great effect on their real-life functioning, and pose a substantial burden on them, their families, and health-care systems”

OUR PRODUCT ON NEGATIVE SYMPTOMS