Aiming to address the problems with current psychosis management strategies, this symposium at the 29th Annual EPA Virtual Congress 2021 included three presentations about the recent advances of research that aid the prediction of outcomes in psychosis.

The session was moderated by Professors Matej Orešič from the University of Örebro and Phillip McGuire, Professor of Psychiatry and Cognitive Neuroscience at King’s College London, and considered a range of topics, from neuroimaging and machine learning to developments in metabolomics for schizophrenia prognosis. The speakers were Dr Maija Lindgren from the Finnish Institute for Health and Welfare, and Professors Paulo Brambilla, Associate Professor of Psychiatry at the University of Milan, and Matej Orešič, who shared their research and expertise in these areas with insights on how they can be used in the future.

The symposium began with a lecture from Dr Maija Lindgren who addressed the importance of predicting outcomes in first-episode psychosis patients, with a focus on cardiometabolic outcomes and biomarkers of use. 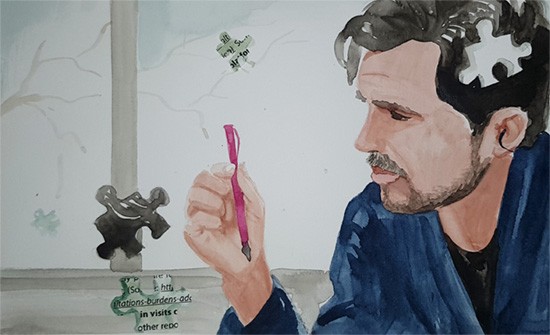 Dr Lindgren began her talk by emphasising that there are varying outcomes in first-episode psychosis for different individuals and in order to help clinicians to identify a suitable intervention strategy, several prognostic markers can be used.

Dr Lindgren and her team in Helsinki have studied 97 young adults with first-episode psychosis and  assessed their symptomology at 2 and 12 months after starting treatment.1 Interestingly, the researchers found that the one-year outcomes were most influenced by the cognitive deficits that were present at treatment onset, more so than positive and affective symptoms.2 However, when accounting for negative symptoms this was not the case, as Dr Lindgren highlighted.2 In a similar study, more severe obsessive-compulsive disorder (OCD) symptoms predicted reduced remission rates at year 1, while higher anxiety levels predicted better functional outcomes.3

Then, Dr Lindgren continued to discuss the cardiometabolic outcomes in psychosis. Cardiometabolic diseases are known to be linked to inflammation and it is a well-known fact, she stated, that first-episode psychosis is associated with low-grade inflammation. Therefore, cardiovascular and metabolic outcomes should not be overlooked. 4 Indeed, Dr Lindgren and her group investigated the role of C-reactive protein (CRP), a surrogate marker for low grade inflammation, and waist circumference as a predictive factor for psychosis. They found that levels of CRP increased by 2.5-fold following a first-episode psychosis, despite not being elevated when measured at baseline, and increased waist circumference was reported to worsen this low-grade inflammation.4 These findings help us to better understand the cardiovascular risk in  this population and bring together the various outcomes of first-episode psychosis.

However, as Dr Lindgren pointed out, their research has also shown that other factors seem to have less predictive power than one might think; compared to negative symptoms, the role of affective and positive symptoms in predicting 1-year outcomes seemed quite small.2  Furthermore, in an unpublished study, cannabis use, both recent and lifetime, did not predict cognitive outcomes.

To summarise, the research of Dr Lindgren and others in this field is important in continuing to improve the understanding of different predictors of first-episode psychosis and to enable better clinical and functional outcomes for patients in the future. Combined with a holistic approach to treatment that takes metabolic and cardiovascular problems into consideration, the therapeutic landscape for this population can hope to see improvements as more advancements are made.

The second talk by Professor Brambilla, Associate Professor of Psychiatry at the University of Milan, revolved around the advances of machine learning, a valuable tool that is increasingly used in the field of psychiatry. At its heart, machine learning refers to the ability of computers to learn and perform actions without being explicitly programmed, once provided with a training data set.1 Importantly, in the past years techniques like this have evolved into sophisticated tools that have the ability to aid psychiatric assessments and improve our understanding of brain conditions.

To explain, Professor Brambilla presented a new shape morphometry approach that combines advanced classification techniques with geometric features, which has recently been developed by his team. This approach has the ability to detect morphological abnormalities on the brain’s surface and has the primary aim of improving the accuracy of distinguishing patients who are schizophrenic from those who are not.5 According to their results, the programme exhibits an accuracy of up to 86%, positioning this technique as a promising tool in the diagnosis of schizophrenia.

Another technique, called the spectral shape analysis, similarly aims to detect morphological abnormalities in patients with schizophrenia. Indeed, Professor Brambilla presented a new shape descriptor, that is capable of encoding the morphometric properties of a brain image using diffusion geometry techniques.6 This approach can be used to design a versatile signature and enables the classification of schizophrenic and non-schizophrenic individuals from magnetic resonance imaging (MRI) scans.6 Compared to other shape description techniques, the one developed by Professor Brambilla’s team demonstrates an accuracy of up to 83% in detecting schizophrenic patients from a pool of 60 MRI scans.7

When it comes to making advancements in the field of neuroimaging, first-episode psychosis patients are of particular interest because they lack confounding effects of medications and chronic disease.7 To demonstrate this, Professor Brambilla discussed a new method based on multiple kernel learning, a machine learning technique using a predefined set of kernels that consistently provides strong classification capability compared to more widely used methods.8 Not only did the results boast a strong discrimination accuracy of over 90%, but specific regions in the right hemisphere involving the prefrontal-limbic network (PNL) were shown to be impaired in first-episode psychosis patients, providing more clues towards the aetiology of such a complex disease.8

This research confirms that classification performance can be improved by taking confounding variables into account. Professor Brambilla identified brain regions including the fronto-parietal cerebral volume, amygdala volume and immunomarkers as good candidates for predicting first-episode psychosis patients.8  In conclusion, as techniques improve, we can hope to see machine learning integrated with cognitive and genetic assessments to help in predicting treatment response and clinical outcomes.

In the final talk, Professor Orešič at the University of Örebro introduced the topics of using metabolomics in schizophrenia and how to manage the different co-morbidities that are often prevalent with this disorder. He started with the notion that with the emergence of modern scientific techniques, our understanding of the systems involved in schizophrenia has developed significantly. Metabolic co-morbidities, such as obesity, lipid abnormalities and type 2 diabetes, have been consistently seen in people with schizophrenia.9 Although it remains unclear why this risk exists, Professor Orešič suggests that it could be related to both the side effect of antipsychotic treatments as well as to the metabolic changes that occur during psychosis.

Using a pivotal study, Professor Orešič and his team demonstrated that people with schizophrenia have significantly higher levels of saturated triglycerides and other small-molecule clusters associated with glucose regulation.10 This finding suggests that specific metabolic abnormalities are present in schizophrenia and adds to the growing support for metabolomics as a powerful tool in psychiatric research.

Professor Orešič continued by discussing the role of metabolite profiling as a tool to identify psychosis patients who are most at risk of developing metabolic comorbidities further down the line. Patients taking antipsychotic medication are known to be at higher risk of weight gain and cardiometabolic conditions, however a personalised approach to treatment could help mitigate these risks. In a recent study, lipidomics, the large-scale study of cellular lipids in biological systems, was used to analyse serum samples of healthy controls and first-episode psychosis patients.11  Professor Orešič and his team found that weight gain was linked with elevated levels of lipids associated with increased liver fat in psychotic patients, providing a useful metabolomic tool to assess risk of cardiometabolic comorbidities.11

Importantly, metabolomics can be also combined with neuroimaging techniques, offering a more integrated view of the changes occurring during psychosis, Professor Orešič suggested. For instance, obesity-associated changes are known to be influenced by activation of the endocannabinoid system, which can be quantified using positron emission tomography (PET) scanning.12  In first-episode psychosis patients, research found that circulating levels of endogenous endocannabinoids were reduced, but only in patients who were being treated with antipsychotic medication.12  Professor Orešič highlighted that other changes were also observed between healthy controls and first-episode psychosis patients, suggesting that a dysregulation of the endocannabinoid system accompanies the metabolic abnormalities and the changes occurring in psychosis.12

It is important to note though that in this field of study, it can be difficult to distinguish whether metabolic changes precede psychosis or are a by-product of the other physiological changes that are present. Nonetheless, a recent study has demonstrated that individuals with a high risk of psychosis have higher levels of lipids in general.13 Furthermore, those who went on to develop psychosis were identifiable from their baseline lipid profile and had lower levels of phospholipids than those who did not develop psychosis.13

In conclusion, this research field highlights the significance of metabolomics and lipid profiles as a clinically useful tool in psychiatry and furthers our understanding of the systems involved in psychosis and how we can use them to our advantage.